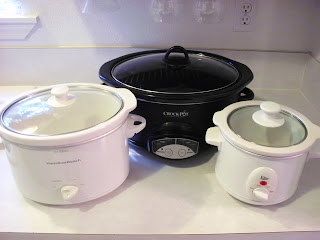 My second favorite appliance is hands down my slow cooker.  Slow cookers come in a variety of sizes.  In fact, I have three of them – small, medium and large.  I love the flexibility and freedom they offer me.  They are affordable and energy efficient and in the summer they won’t heat up your kitchen like the oven will.  You can also plug them in and use them outside if you wish.  I’ve even taken mine on vacation and used it in our hotel room.  I’ll bet the maid was jealous when she smelled our dinner cooking.  I wonder if she snitched a bite.


If you don’t have one you should seriously consider getting one.  You can find them on sale quite often around $18 to $30 or at thrift stores and garage sales for just a few dollars.  You may even have a friend or relative that has one they aren’t using that would be happy to pass it along to you.


Along with making applesauce (as previously posted) I love to use it to cook dried beans, make spaghetti sauce, chili, soups and stews, roasts, chicken, ribs, carne asada, pork or chicken verde, and so much more.  I even know of people who bake in theirs.


I use my small one a lot more than I thought I would.  Originally I thought I would use it to keep sauces warm, particularly cheese dips on game day, but I have also used it to cook small meals and to reheat leftovers like spaghetti or chili on a busy day.  It is not uncommon to see them all three lined up on the counter cooking various things for meals I have planned throughout the coming week.
My Favorite Pot Roast

At the last hour and a half of cooking you can add raw vegetables like potatoes and carrots if you wish.  Or serve with steamed rice and a nice salad.  It roasts in its own juices and this can be made into fabulous gravy so don’t throw it out.  If you decide not to make gravy save it and freeze it for soup or a stew.

There are a lot of great slow cooking blogs and recipe sites out there on the internet.  I encourage you to do some research to get inspiration and find some new recipes to try.  I’ll be posting more of my favorites here as well.
Posted by Thrifty Mom In Boise at 2:48 PM

Email ThisBlogThis!Share to TwitterShare to FacebookShare to Pinterest
Labels: In the Kitchen, Recipes