The Joy Of Spray Paint 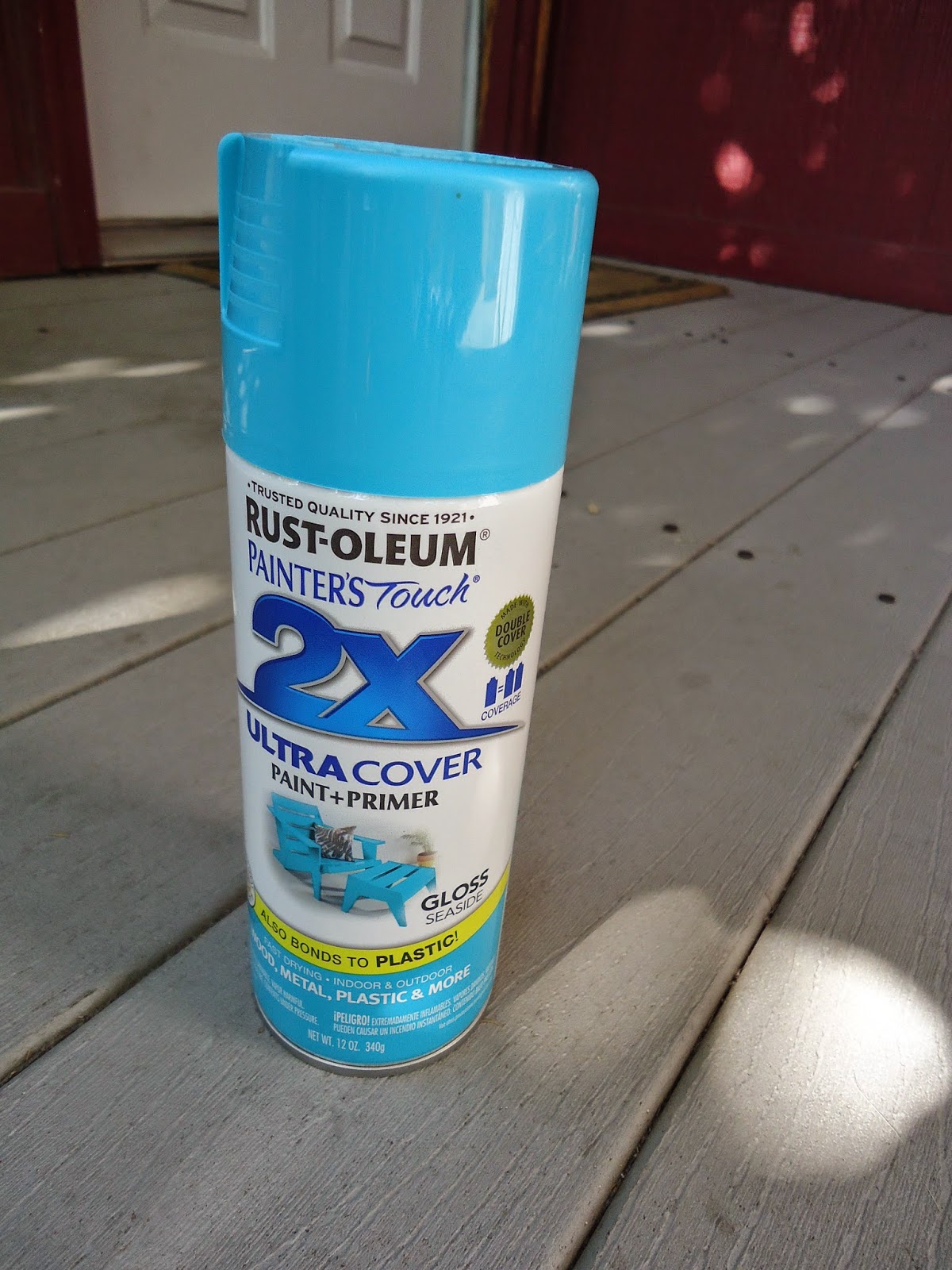 Got something a little on the ugly side?  Just grab a can of spray paint and make it darling!

Our little mini fridge was beginning to show its age and a couple of scratches on the side had decided to rust.  Not the shabby chic look we were going for and since it still works like a champ we weren't too motivated to trash it either. 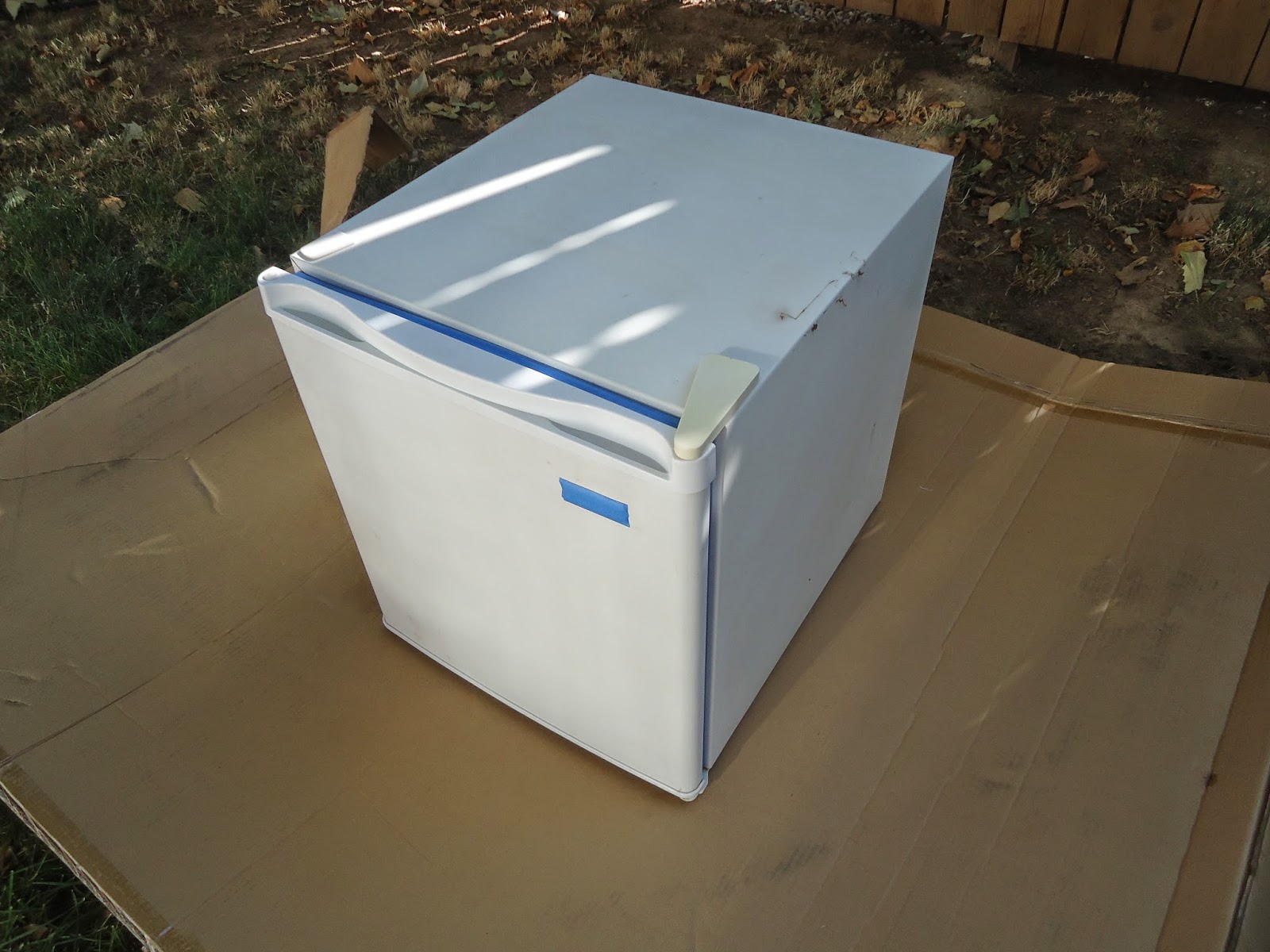 My oldest decided she wanted it in her new "teenager hangout/bedroom" so we decided to paint it.  She chose a can of turquoise paint at Home Depot and we got to work.  After spending a little time cleaning up the outside of the refrigerator she carefully masked it off with painters tape.  Then she gave it a final wipe down with a clean rag and some rubbing alcohol to make sure there wasn't any type of residue on it that would cause the paint to lift. 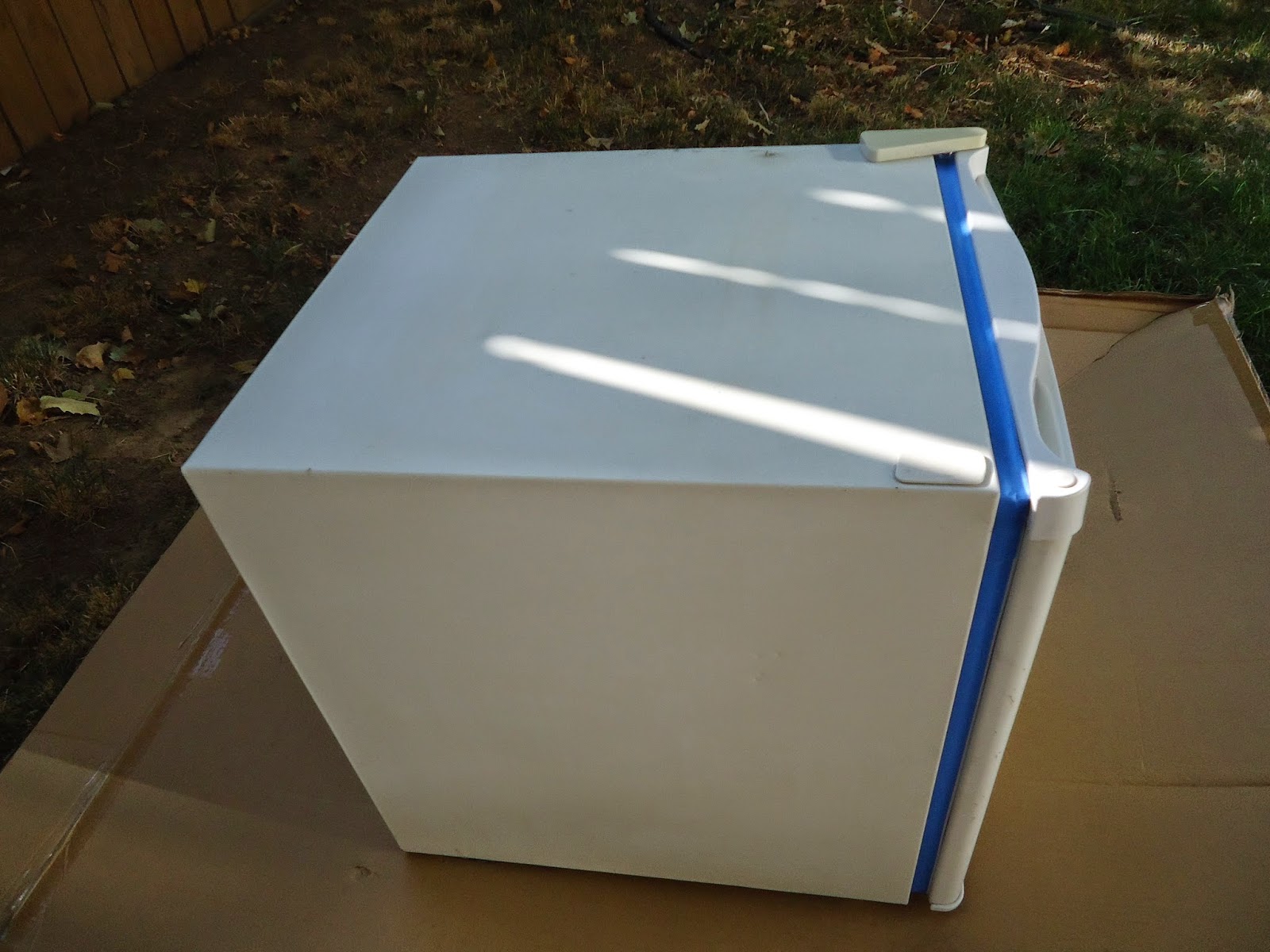 I had the pleasure of doing the actual painting.  I gave it two coats and two hours later it was ready to move upstairs to the "hangout".  She loves it and I think it turned out fabulous.

That project motivated me to grab a can of gloss white and give our stair rail a fresh coat of paint.  It had been awhile since it had been painted and the tenants had removed it to bring down their furniture from upstairs and had left it leaning against the living room wall.  May as well spruce it up before I go to the trouble of re-installing it.  Right?! 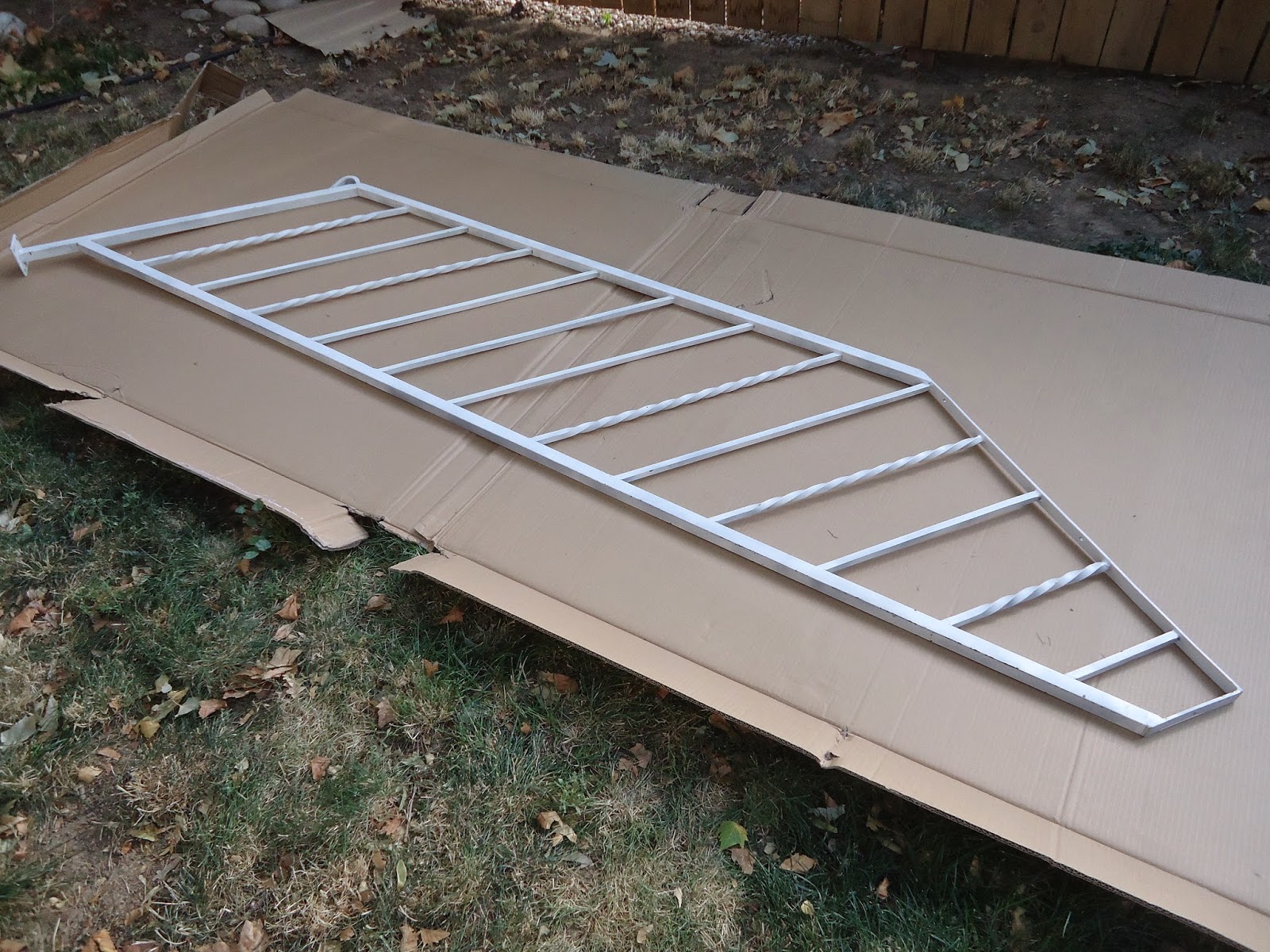 We cleaned it off and gave it a once over with rubbing alcohol just like the fridge.  It amazed me how much stuff came off the railing with the rag and alcohol after it had just been cleaned.  After two good coats of paint and a couple hours to dry the three of us girls got it back in the house and screwed into place on the stairs. 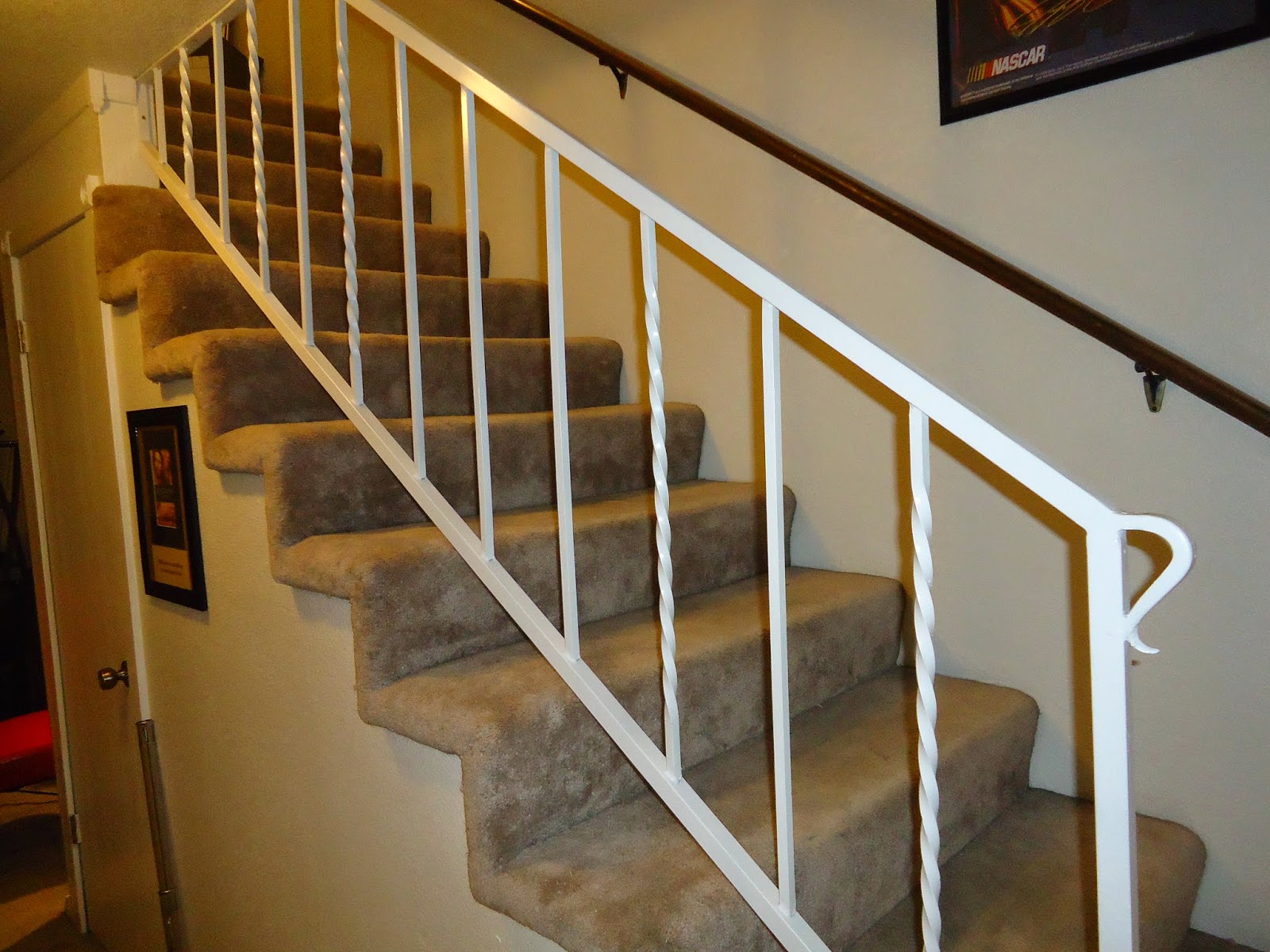 It felt really good to give two worn out items a much needed facelift.  I almost forgot how much I love these kinds of projects.  Now they are done and I am fueled to get going on another one.  Hmmmmm.  I wonder what it will be?

Email ThisBlogThis!Share to TwitterShare to FacebookShare to Pinterest
Labels: Crafts And Projects, Our Home 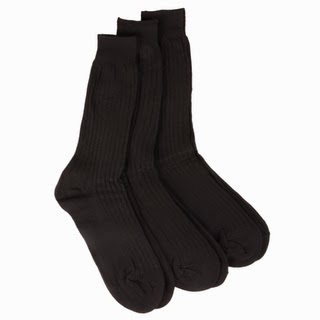 Sunday I went to ShopKo because I had a $12 store coupon about to expire and a list.  I needed a new set of sheets to fit my new bed and it was time to get the youngest some new school clothes.  I found a beautiful set of Egyptian cotton sheets for $89.99 on sale for $34.99 and jean for the girl for $11.99 each.  I bought her two pair and a really cute top we found on clearance for $7.49.  I also bought myself 3 pair of black dress socks for work on sale for $4.99.  By the time we checked out and I used the coupon I ended up getting one pair of my daughters jeans for free.  Yaaay!  When they gave me my receipt they also gave me a $10 coupon for my next visit.

Although the bill for the credit card I used to order my dining room chairs and table hasn’t come yet I went ahead and logged onto my account online and made an early payment using the overtime I earned this past pay period.  When my bill comes next month I plan to pay off the remaining balance.

When I moved back into the house I decided to switch my mortgage payment dates around to different paydays.  This week I paid my house payment ten days early which will now be the norm and will save me quite a bit of interest in the long run.  Adding a few extra dollars each time will add to the savings.

I listed the RV for sale on Craigslist and reposted the camper shell.  I also listed our cute little washing machine.

I spent $4 for a can of white spray paint and repainted our stair rail.  It turned out really nice.

I baked two loaves of whole wheat bread and made a big batch of refried beans.  I put up four containers of the beans in our freezer and used a fifth one to make beef and bean burritos for our supper one night this week.

Saturday morning I printed off a $4 coupon online for my favorite shampoo.  At Walmart I was able to use it to buy a large bottle of shampoo and one of conditioner.  I found that the big bottles were only a dollar more for almost twice as much as the regular size making it a much better bargain.  Factoring in the coupon it made the big bottles half price.

I worked six hours of overtime this week.


Did you find some ways to save money last week?
Posted by Thrifty Mom In Boise at 6:37 AM 6 comments: 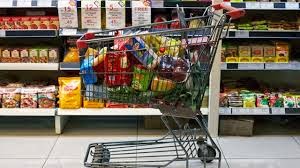 To say our cupboards were bare would have been an understatement.  We moved in with very little and had to start from scratch.  But now they are filling up and that always makes me very happy.  Especially as we gear up for winter and high monthly heat bills.

My goal was to restock and get as much as I could for as little as I could spend.  I think I did rather well all things considered.  There were several items on my list I had to go without because the prices were just too high.  Primarily that was beef.  With the exception of a package of frozen hamburger patties, I pretty much didn't buy any, especially since lean ground beef has been running nearly $5 a pound!  Finally toward the end of the month I found some packages of extra lean ground beef in the markdown bin and I bought three of them.

I jostled the menu plan a little and substituted pork or poultry where I could and things turned out rather well.  We enjoyed some delicious meat less meals too.

I blew the budget on our non food purchases coming in at $44.36.  Still not bad considering everything I bought and was able to stock up on.  In preparation of winter and cold season I picked up 10 boxes of tissue, one was a box of lotion tissues and I had a friend grab me a case of toilet paper at Costco while he was there.  Additionally, I bought cat food, dish soap, toiletries, hand soap, cleaning supplies, coffee filters and dryer sheets, most of which came from the dollar store.

I have a long list of the groceries I purchased to restock our pantry and freezer so bare with me.  Nearly everything I bought was on sale and I maximized my savings by adding coupons to sales items whenever I could.  My goal was to keep it under $300 this month.

I think I did pretty well:

Items in red are stock up items and should last for a long time to come.  I plan to go back to my regular shopping routine and budget in October and throughout the remainder of the year.


Did you find any great deals at the grocery store this month?

Posted by Thrifty Mom In Boise at 6:16 AM No comments: