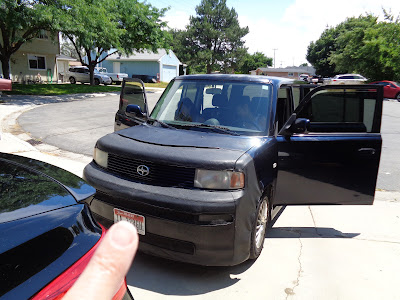 My daughter's car is fourteen years old.  There are lots of nicks, small dents, scratches, some tiny rust spots and a lot of oxidation, especially up on the roof.  Some things on the car need to be replaced or repaired.  On the whole the thought of all those things seems overwhelming to her and it is hard to know where to begin.  I suggested that we eat this elephant one bite at a time rather than try to stuff the whole thing into our mouth.  She agreed and we decided to begin with "Phase 1".  The Hood.

The previous owners decided to cover up the front of the car with a Le Bra.  A lot of people think this will protect their car and it will, however it isn't meant to be put on and to just leave it on indefinitely.  You still need to remove it and wash underneath.  They didn't do that.  Over time dirt accumulated and damaged the paint underneath it, but mostly the sun did a number on this car as well.  The hood was extremely oxidized and sun damaged. 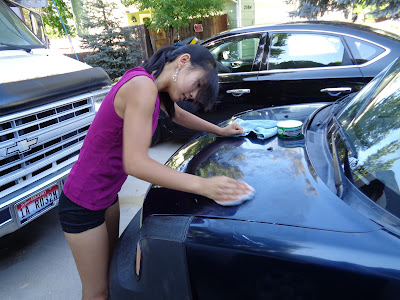 We opted for a three part solution - rubbing compound, polishing compound and wax.  We also opted to do all of the work by hand as we didn't want to risk working through the paint and creating more damage.  We definitely didn't want to make the situation worse.

After washing the car we used rubbing compound and worked out the majority of the oxidation.  Then we used polishing compound to bring back the paint.  That was by far the hardest part of this project and required the most effort.  We had to break it up over two days to give our arms and hands a much needed rest.

Lastly, but certainly not least, we applied and buffed the hood with two coats of carnauba wax.  Wow, did it ever shine!  You could see yourself in the finish.  It turned out much better than we ever imagined it could.

My daughter was beyond ecstatic, not to mention how proud she is of this accomplishment.  She admitted that initially she had little faith that we were going to pull this off.  She also told me while we were working on it that this was definitely where I was being a "Dad".  I thought that was pretty cute.

The rubbing and polishing compounds were $5.99 each and the wax was on sale for $5.49.  A two pack of compound applicators was $2.49.  We purchased these things at O'Reilly Auto Parts, or rather my daughter did.  She has a budget, a rather small one at that, for making repairs and we are going to try our best to stretch it as far as possible.  Total spent on Phase 1 = $19.96 + tax


It took us two days and A LOT of elbow grease to work out the oxidation, polish out the scratches and marks left by Le Bra and then bring it to a shining conclusion.  It was a ton of hard work, but the end result certainly made it all worth it.

Next project, or "Phase 2", is to repair the roof. 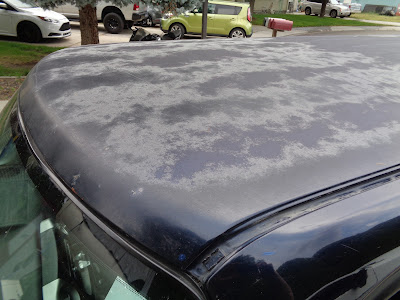 It is beyond the clear coat and there is some small rust spots as well as damaged paint.  Wait until you see the solution we came up with for this!

Email ThisBlogThis!Share to TwitterShare to FacebookShare to Pinterest
Labels: Crafts And Projects