It has already been six months since my last update!  Can you believe that?  My, oh my, how fast the time goes.  And how quickly plans can change too.

In my last update I was on track for debt elimination and the purchase of a second smaller home to retire into.  In fact, I was seriously planning to start looking for said home beginning in January 2018.  But now my retirement home is sitting in my driveway!  And I love her!

You all know about Laverne, of course, and how I plan to downsize (once again) and move into her and travel.  Once I made the decision to take the purchase of a second home off the table things have really changed for me.  In looking at my finances and crunching numbers, discussing my options with my closest friends and a lot of weighing the pros and cons I have a lot more choices open for me. 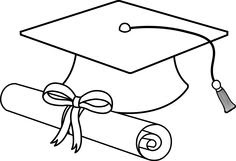 In five years my youngest will be starting her senior year of high school.  Crazy I know, but true.  Five years goes by in a heartbeat.  Right now I want to concentrate on the time I have left to be a full time parent to my girls.  I don't want to be looking for real estate, working hard to pay for that property and devoting all of my spare time to renovations and improvements.  I want to just be their mom.

For now I'll just be making improvements to our current home and the motorhome, which looks far less daunting to me as there isn't a whole lot that needs to be done to either one.  Our house needs paint and carpet and a few minor repairs that I'll be able to do on my own, no big deal.  The motorhome needs new tires and only two of those need to be done right away.  Also a couple minor mechanical things done, a new propane tank and gas lines and I'm thinking about upgrading the transmission as old motorhomes have a tendency for tranny problems.  I also want to spruce up the exterior and add some additional storage options. Suffice it to say, by the time I hit the road, she'll be ready. 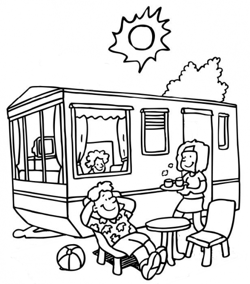 Once I'm mobile I'll be able to do pretty much whatever I choose.  Not purchasing a second home has freed me up to the point that now I can consider retiring early at 62 instead of waiting until I'm 65.  Once my daughter is on her own and settled I can sell our house and move into the motorhome which will cut my monthly living expenses dramatically.  I'll also have the option at that point to work part time, or move south in the winter and work seasonally leaving my summers open for travel.  The added bonus is that no matter where my girls end up I'll be able to go and see them for visits.

So that is where I am at right now.  And of course, we all know, plans can change and often they do.  But for now, this is the plan.  And I am really, really excited about it. 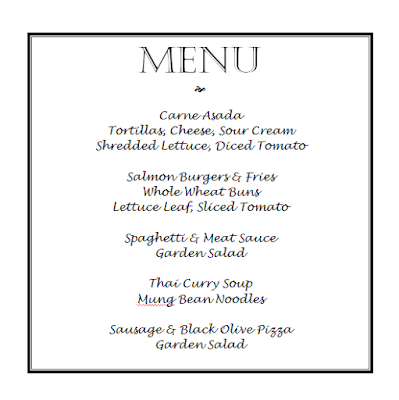 Friday evening I took meat out of the freezer to thaw.  A package of Italian pork sausage and some steak.


Saturday morning we shopped.  I meal prepped on Saturday by browning the sausage.  I removed 1/3 of it and set it aside to freezer for pizza topping, then added sliced mushrooms to the rest of it and cooked that until they were tender.  I put a can of pasta sauce and 2 cans of Italian style diced tomatoes into my medium slow cooker.  I added a large spoonful of minced garlic and a tablespoon of dried basil.  Once that was stirred together I removed a 1/2 cup of the sauce to use for pizza sauce.  I then added the meat and mushroom and allowed it to simmer on low for 4 hours.  .  I cooked up a pound of spaghetti, drained it, and put it into a bag.  The sausage and pizza sauce went into the freezer.  I also put half of the finished pasta meat sauce into a 4 cup container and put it in the freezer.  The rest was put in the refrigerator with the pasta.

That was pretty much it for the meal prepping for the weekend.  Not too bad, huh?

Sunday - I pan fried the steaks which came already seasoned for Carne Asada and finished them off with a handful of chopped cilantro and a lime.  I heated the corn tortillas in a dry pan, sliced up the steak and served it with grated cheddar, sour cream and salsa.  Delicious! 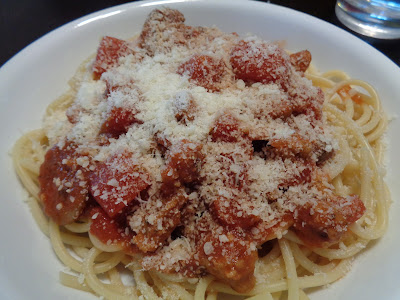 Monday - We heated up the pasta meat sauce in the microwave and I warmed up the cooked spaghetti in a pan of hot water.  My youngest made a quick Caesar salad with romaine, croutons and dressing.  Dinner was on the table in 15 minutes. 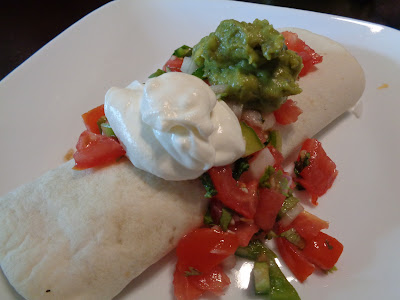 Tuesday - In the morning I cooked up a cup of rice, transferred it to a dish and placed it in the refrigerator.  That evening I made a quick fresh salsa of diced onion, diced tomatoes, garlic, cilantro, salt & pepper.   I used the leftover steak, some rice, leftover cheese and leftover flour tortillas to make Carne Asada burritos.  I served those with the fresh salsa, sour cream and some guacamole.  Dinner was on the table in 10 minutes. 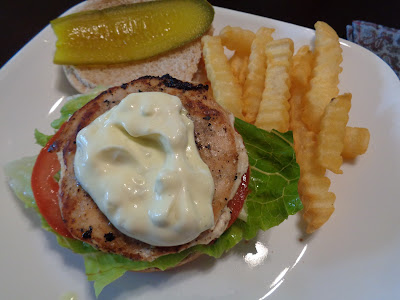 Wednesday - While a pan of french fries cooked in the toaster oven I pan fried salmon burgers.  I also boiled up a couple ears of corn.  The burgers were served on whole wheat buns with lettuce, sliced tomatoes, sliced pickles and leftover homemade tartar sauce.  Dinner was on the table in 20 minutes. 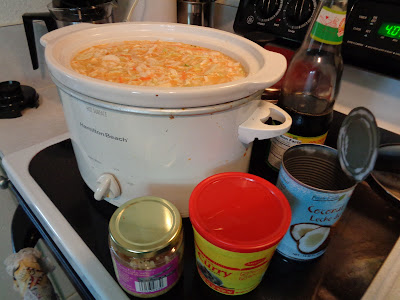 Thursday - As soon as I got home from work at 3:45 I put all of the ingredients for Thai curry soup into my slow cooker - coconut milk, shredded cabbage, water chestnuts, some Asian seasoning sauce, and a large spoonful of red curry paste.  I let that cook on high.  By the time I picked up the girls from their schools and made it home the soup was ready.  All I had to do was soak the mung bean noodles in hot water for five minutes.  I put half of the soup into a container to freeze for a future meal.  I added the noodles to the remaining soup.  It made for a super easy one pot meal.  Total prep time was less than 10 minutes. 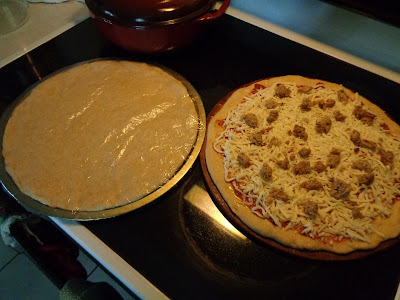 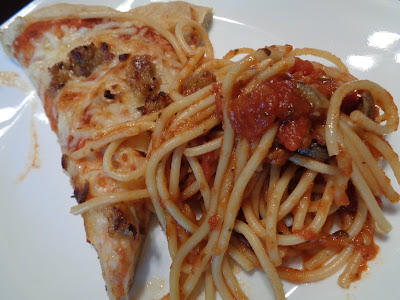 Friday - In the morning I removed the sausage and pizza sauce from the freezer to thaw.  That evening I made a batch of pizza dough in the bread machine.  I prepared a pizza and put a crust into the freezer for another meal down the line in less than 30 minutes.  I served the pizza with a simple salad and the last of the spaghetti and meat sauce. 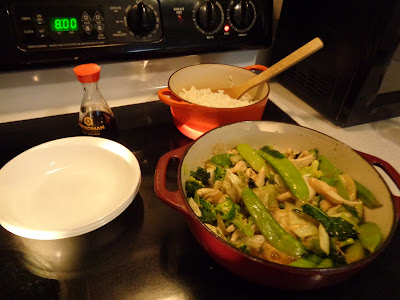 Saturday - I had picked up some stir fry veggies that were on markdown when I had shopped and used those to make a quick chicken stir fry.  Quick and easy. 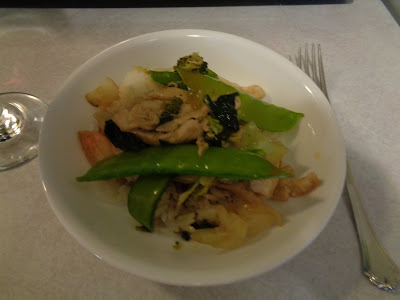 We had plenty of leftovers each day for lunches.  Once again everything flowed smoothly.  I found that planning out and prepping 5 meals is more than enough for us.  It leaves Saturday free to use up any leftovers, prepare something else entirely or go out to eat.  I like having that flexibility.

Getting dinner on the table each night is, without a doubt, super quick and easy, with minimal dishes and clean up.  Stress free for sure and I definitely didn't feel like I was spending a ton of time in the kitchen over the weekend getting everything ready with only one meal to actually prep.  I'd say it was a success, once again!

Email ThisBlogThis!Share to TwitterShare to FacebookShare to Pinterest
Labels: In the Kitchen, Organization, Simple Living 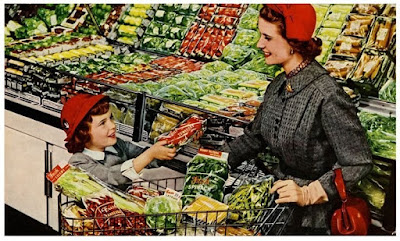 This month I concentrated on school lunch stuff and stocking up some things for our winter ahead.  I purchased meats on sale and from the markdown bin to add to what we already have in the freezer.  I also took $50 in addition to our regular grocery budget to purchase items the girls can pack in their lunch each day.  Those things include individual packages of chips, crackers, cookies, fruit cups, juice boxes, granola bars and Pop Tarts.  Yes, I stepped outside my norm and did the busy mom thing and my girls are super excited about it. 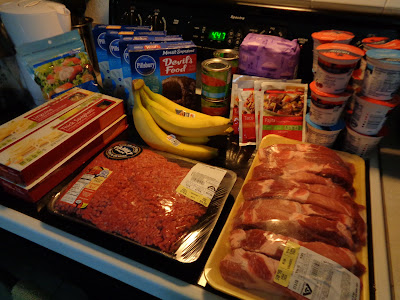 Our nonfood items were comprised of sandwich bags, cat litter, cat food, toilet paper and a bottle of laundry detergent I picked up at Walgreens on sale and with a coupon for 99¢.  I came in at $33.45 over my regular $25 budget which puts me at -$7.45 for the year so far. 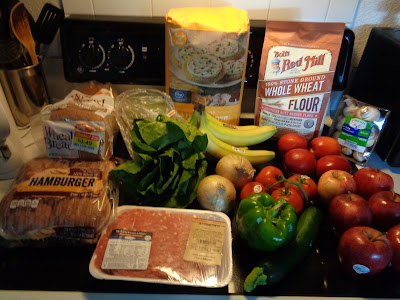 Our regular groceries included lots of fresh produce, lunch meat, meat, a few extra lunch items (when my $50 ran out) and some dairy items.  I stalked up on canned goods and pastas too.  I used a lot of coupons, digital coupons downloaded to my rewards cards and shopped the sales and markdown bins as much as possible.  Here is what I got: 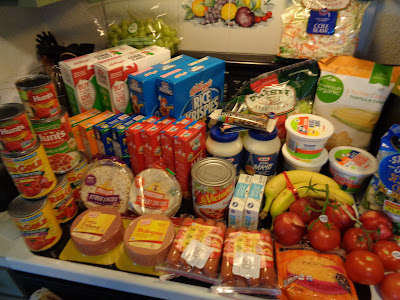 Still higher than I would like, but overall not bad.  How did you do last month?  Any great bargains?

This budget month runs from August 1 through August 31