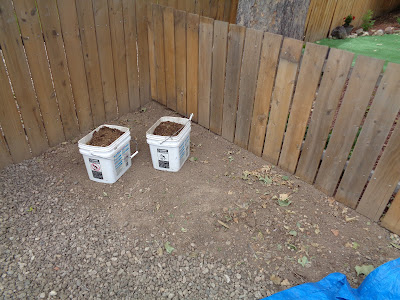 When I first moved into my home in January of 1995 our entire yard was seriously overplanted and so crowded with overgrowth that you could not walk from the frontyard to the backyard.  The only way to access the backyard at that time was through the house.  I spent the first few years removing so many scrubby trees, shrubs and plants that were planted way too close to one another.  In fact, where the new flowerbed is now used to be home to an oak tree, a birch tree, a spruce tree plus half a dozen junipers.  Way too much stuff in such a small space.


For a good long time this was just an area to park our car and our trash and recycle bins.  Not much excitement going on.  Since we moved the fence and then gave the entire driveway a refresh I decided it was also a good time to add back some curb appeal.  As you can well imagine the soil was pretty poor so I hauled six buckets of our homemade compost from the backyard and got it all turned into the ground.  Then I left it to settle overnight and gave it another good turning the next day.  I am amazed at how quickly adding this compost transforms the soil.  Just a few days and it's like magic.


A trip to Home Depot with a gift card provided a new shrub and a few perennials.  My next door neighbor provided me with some sedums.  I bordered the bed with rocks I had in our backyard as well as a few that I'd dug out of the ground while turning the soil.  I think I'd like to add some daylilies here too.  The finishing touch was to add some bark mulch.  All in all, I think it turned out pretty good and is exactly what this area needed.


I redid one of the flowerbeds next to our back deck on each side of the steps and reinstalled some pavers in front of those steps.  The flowerbed along the side of the house now curves around the corner to the back of the house and meets one of the flowerbeds by the deck making it much more cohesive. My daughter bought me a burning bush to plant in there and as it grows it will offer a shield for the ugly utility box on the back of the house.  While I was at it I also refreshed the gravel in front of the steps and even gave the drain under the downspout a bit of a facelift.


The next project on my list was to renovate the flowerbed where our pear tree grows.  This fall I will be pruning that tree and next spring I plan to invest in some blueberry bushes and possibly some strawberry plants to put around the base of the tree.  For now I am just getting it ready for planting so I cleaned out the area, added compost and turned the soil.  Then I bordered it with more rocks I picked up from Facebook Marketplace.  I added a shrub to one end of the where it borders the frontyard.  Once it is complete I think it will be very nice.


I have a lot more little projects to work on in both the front and backyard, a few things I want to do to the exterior of the house and there will likely be more gravel collecting in my future, but I've managed to finish the bulk of my project list already.  I'm rather surprised by that to be quite honest. It seems like it has gone rather quickly.  The best part though is whenever I look out my windows or step outside I am very pleased with what I see.  For the first time in my life I have a home with a beautiful yard.  The yard of my dreams!  This is so exciting!

Email ThisBlogThis!Share to TwitterShare to FacebookShare to Pinterest
Labels: Crafts And Projects, Gardening, Our Home 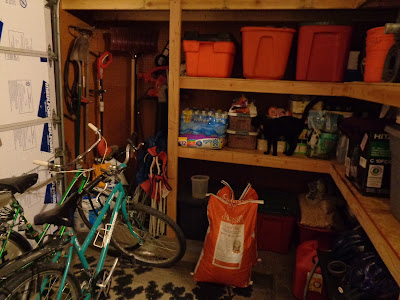