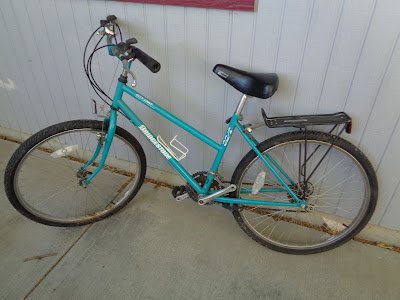 We've been looking at bikes for a little while now.  This past year my youngest has been interesting in getting a bicycle.  Periodically we've checked at various stores, some pawn shops, a few thrift stores, even Craigslist and so far had found nothing that what we were wanting or we did, but for much more than what we wanted to pay.  A good quality bicycle is very expensive and an affordable one is not very good quality.  We knew if we were patient the right bicycle would find its way to us. 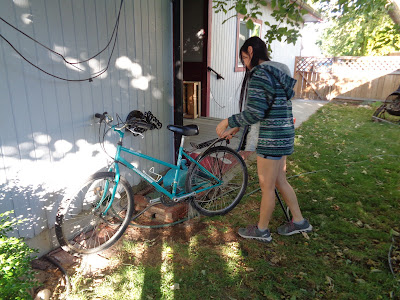 Last Sunday morning I happened across an older bicycle on Facebook Marketplace and the seller was asking $5.  I contacted her and of course someone was coming to get it.  Later that evening however, she messaged me to let me know it was still available.  We hopped into the truck and headed over to see it.

The bike was very sturdy with a good seat, two flat tires, one peddle (the other one was lying on the ground) and it was  filthy dirty.  We'll take it!

First thing we did when we got home was air up the tires and guess what?  They hold air.  Upon further inspection, past the dirt, I realized the tires were brand new.  Still had the little nubbins on them and no cracks.  The brakes work just fine and the "broken" pedal needed a new crank arm as the threads that hold the pedal on had completely stripped out.  The handgrips were worn out and had been taped up with black electrical tape which had gone rather sticky.

With not much of a budget I went onto Amazon and a replacement crank arm for $13 and a kickstand for $7, as this bike didn't have one, for a total of $20 in parts.  I placed an order and while my daughter filled up a bucket with some soapy water.  Giving the bike a bath made a HUGE difference right off the bat.  My daughter washed off loads of grime and cobwebs.

Once the parts we needed arrived we headed out to the garage, got the old crank arm off and the new one on using a crank arm puller I picked up for $6.  With the new crank arm on we screwed the pedal back on and added the kickstand.  We adjusted the seat, tightened up a few loose screws here and there and checked the tires.  After three days the tires were still holding air.

Lastly I used some black electrical tape and re-taped the handgrips.  We'll be shopping for new ones in the not too distant future, but for now this will work.  Not the repair I would've preferred, but sometimes you just have to go with it.

The lady that sold the bike to us probably thought it was a lost cause.  She even wished us good luck after we loaded it into the truck.  Airing up the tires, a little soap and water and a few minor parts got this girl up and running.  We took it for a spin in our neighborhood and it seems to be in perfect condition.  Now my daughter has a really nice solid bicycle and she is super happy with it.  So am I.

Along with new handgrips we will be purchasing her a new helmet and a bike lock next and then she and I have some serious cycling to do.  We are both pretty excited about that.  I absolutely love when we can take something like this and fix it up to be useful again.  I'm really happy that we were able to give this bicycle a second chance and kept it out of the landfill because I have a feeling that if we hadn't picked it up that was probably where it was destined to go.  It looked pretty pitiful when we got it.  But it is pretty amazing now.

Email ThisBlogThis!Share to TwitterShare to FacebookShare to Pinterest
Labels: Crafts And Projects, Recycling