My Date With A Hedge Hog This past Saturday I was up and out early to tackle another project.  I wanted to get at it before the heat of the day hit as we were supposed to be encroaching on the century mark temperature wise.  We'd had a bit of a thunderstorm the night before so by the time I got out there it was really muggy and humid.

My neighbors have a HUGE row of hedges along our property line.  Over the years they have slowly been creeping their way over and are now encroaching on our driveway space. 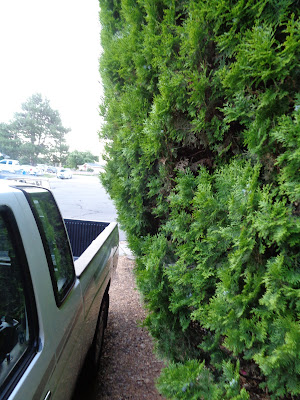 We live on a cul de sac so on-street parking can be tricky making our driveways very necessary.  Several years ago I had put down gravel next to our driveway in order to control weeds and add on to our driveway.  It made the perfect place to park our camp trailer and my truck.

Parking on the gravel has been increasingly difficult.  My neighbor has the hedges trimmed every spring and this year and the year before he asked the guy to be a little more aggressive on our side and cut them back.  It never happened.  The guy just gave them a light trim and needless to say we were both very disappointed. 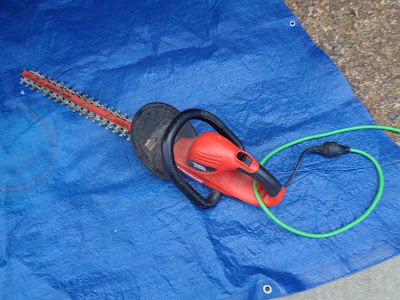 Not only are they overgrown, but also full of wasps and spiders.  They also stink.  If you brush up against them you smell like cat pee.  I don't know why these types of shrubs smell like that, especially in hot weather, but they do.  I've never been a fan of these things.

I borrowed a hedge trimmer from a co-worker last week and Saturday morning I got to work.  I used a tarp to collect the majority of the trimmings.  It made clean up super quick and easy.

I did a fair bit of trimming without going overboard as I didn't want a lot of the interior dead wood showing.  Plus I don't want to do damage and make the hedges get sick.  But I did need to cut back enough to safely park our cars without worry of getting scratches on them.  Plus it was getting really hard to get out of our vehicles once we parked. 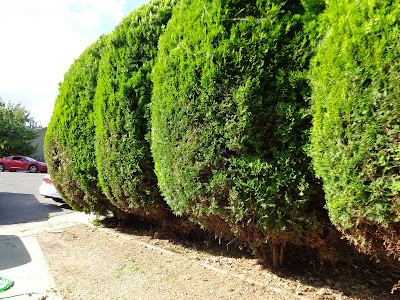 I gained back quite a bit of space and most of the hedges are now back toward the property line.  The one at the end is the largest and most problematic.  It will need to be gradually trimmed back overtime to get it back to where I want it.

I'll probably trim it again in the fall and next spring before his guy comes out to do them.  Hopefully we can get it closer to the property line and open up the driveway more making it safer to park and give us more space.

By the time I got finished and put everything away I was a hot sticky mess.  I headed straight to the shower and found my bra was full of little bitty hedge trimmings.  What a messy job!

But it is done for now and I can park much better in that space along our driveway. I still think they look nice after their big haircut.  They still stink and there isn't much I can do about that.

The wasps were none too happy with me either.  Oh well, can't please everybody.