Our Latest Grocery Haul - A Week Of Great Deals! 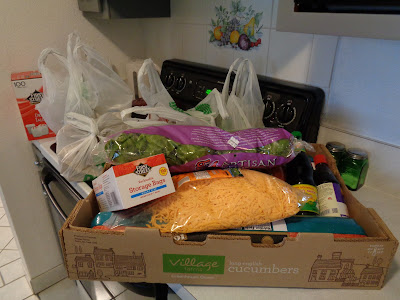 If you've hung around here much you probably already know that my favorite type of shopping is grocery shopping.  For some reason I just love to go to the grocery store, but not to just buy anything.  It has to be good food and a good deal.  And I like to challenge myself by doing this on a really tight budget.  What most families spend in a week I spend in a month.  No joke!


Can you eat well and eat healthy on a budget?  Yes indeed! 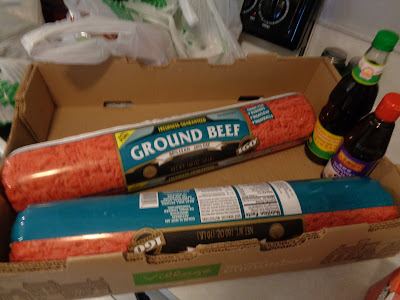 Last week I started my Sunday morning off by heading to Cash & Carry, which is a restaurant supply grocery store.  I check their deals online at their website and when I happen upon what I'm looking for at the price I want to pay I head on over and get it.  This time it was lean ground beef on special for $18.88 for a ten pound package.  I've found quite often that those packages usually weigh in closer to eleven pounds than ten too.  I picked up two of those and a 5# bag of grated cheddar cheese for $10.52.  It's just cheese too, no additives or preservatives.  We picked up some sugar free pancake syrup, five heads of Romaine lettuce, Asian seasoning sauces, an aerosol can of whipped cream, a big box of trash can liners (we use those in our litter box), and a big box of quart size freezer bags. 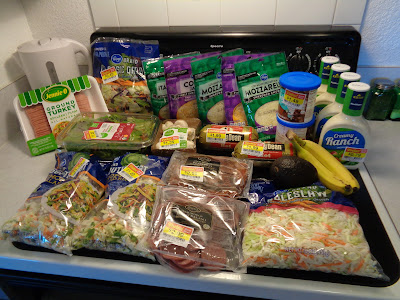 By Saturday I had combed through both the Fred Meyer and Albertson's ads quite thoroughly.  I had gone through all of the digital coupons and offers available and downloaded several to go with items on sale.  I also downloaded the Friday Freebies Fred Meyer offers each week and redeemed some of the rewards points I'd earned at Albertson's to shave $7 OFF any meat I purchased and to receive a free dozen eggs as well.  I had a $5 OFF $50 purchase paper coupon for Albertsons and another paper coupon for a free bag of tortilla chips from Fred Meyer as well as one for 60¢ OFF a bag of cole slaw mix.  Once I had printed out my lists for each store and was all organized my oldest daughter and I were off and running.  She loves to accompany me on these grocery trips and is always amazed and excited at how much we get for as little as we pay. 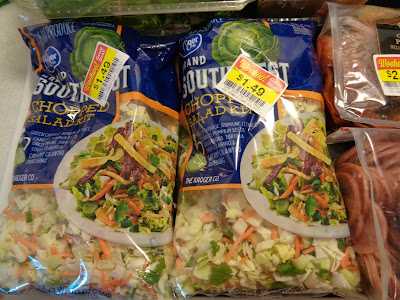 First stop was Fred Meyer to pick up our Friday Freebies and the items on our list.  I went through the produce section first to pick up the items I wanted that were on sale or markdown.  This trip I found plenty of good salad options from what they had just marked down that morning.  My girls love their chopped salad kits and they are a great way for them to get their veggies and fiber into their diet.

Next was the meat department to pick up a package of ground turkey that was on sale for $2.50 and since I had a digital coupon for $1.50 OFF it made it only $1! 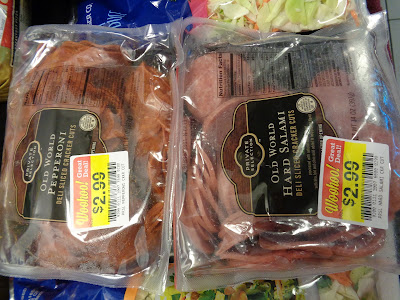 They had marked down some fairly large packages of pepperoni slices and salami slices for $2.99.  Knowing we'll get plenty of meals out of those I picked up one of each.  Pizza anyone?  And the salami slices with some sliced cheese and crackers will make a nice packed lunch option for the girls. 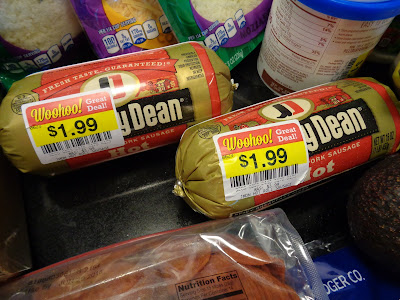 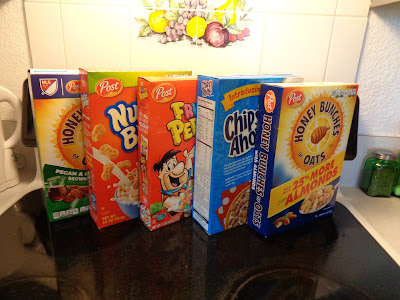 It has been a long time since I bought any breakfast cereal and at least two years I'd guess since I bought the sugary stuff but I treated the girls this trip to some of their old favorites at 99¢ box.  Their Saturday special was five boxes of  cereal and five packages of grated cheese for only 99¢  each.  I picked up the cheese too. 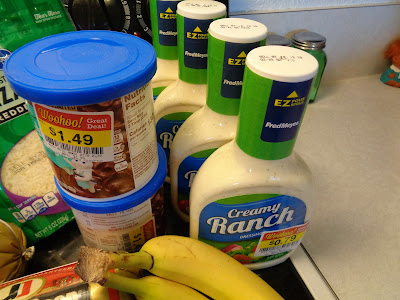 In another markdown bin in the store we came across salad dressing and frosting.  We use this dressing all the time for our salads and my girls use it as a dip.  I picked up four of those and two containers of the frosting so the girls can frost some cupcakes. 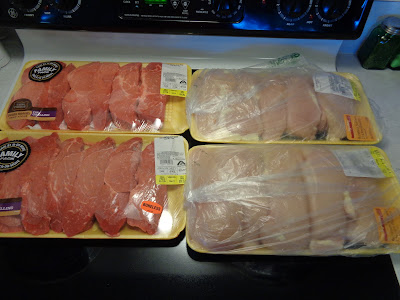 After Fred Meyer we were on to Albertson's to pick up some produce on sale there as well as sirloin steaks for $2.77 a pound and boneless skinless chicken breasts for $1.68 a pound. 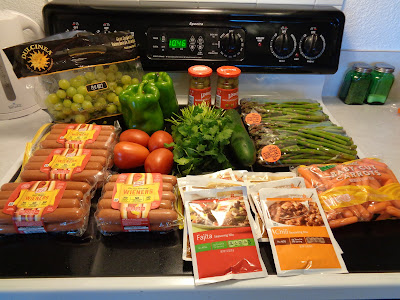 We love their asparagus so I picked up two packages of those for $5.99 (buy one get one free) and grapes for 98¢ a pound.  My youngest loves grapes so she was pretty excited to see those.  I also picked up tomatoes 98¢ a pound, fresh cilantro for 40¢, a cucumber for 40¢, a pound of baby carrots for 95¢ and two bell peppers for 70¢ each.  They also had uncured hotdogs for $1.49 a package, green olives for 69¢ each and seasoning packets for 25¢ each. 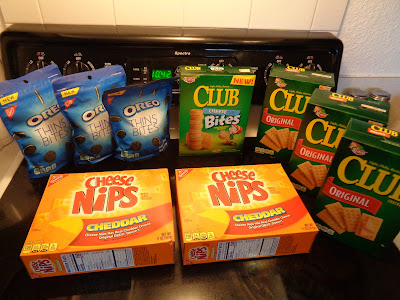 They had crackers and these Oreo Thins on sale so I picked up some to put aside for the girl's school lunches.  The Nips and Oreos were 99¢ each and the Club crackers were $1.79 each. 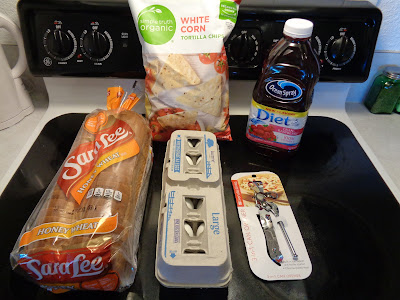 My free items I picked up at both stores included the tortilla chips, a bottle of cranberry juice, a loaf of bread and even a can opener at Fred Meyer.  I got a dozen eggs for free at Albertson's. 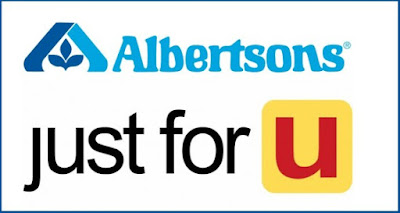 It was nice to have all of the coupons too when we checked out at both stores.  At Albertson's they took off an additional $12 ($7 OFF meat purchase & $5 OFF $50 purchase) from the sales prices and other coupons which lowered the total even more.  Plus I earned extra rewards points in addition to the regular points I earned because I spent more than $40.  That means I can redeem those points to shave off more from our next shopping trip. 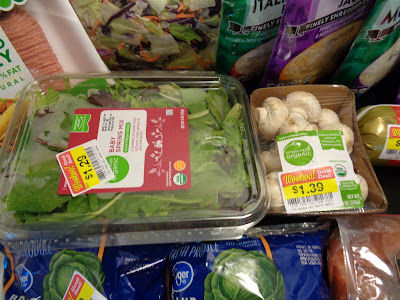 This is a lot of meat and a lot of produce for us to prepare many healthy and delicious meals in the next couple of weeks.  The meat alone will last us for several months and I won't need to purchase much more of that in the coming months.  It is shopping trips like this that I use to stock us up so we don't have to pay higher prices later on.