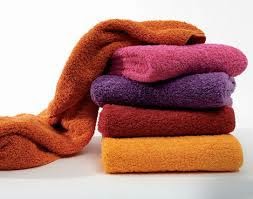 When I got ready to downsize it meant going through and purging a lot of linens.  Tons of extra towels, wash cloths, table cloths and place mats that never got used, a lot of bedding and a large collection of rags.  Don't ask me why I had so many because I honestly do not know.

This is what I decided to keep:

Bedding - we each have two sets of sheets, two pillows, two blankets, an afghan and a throw.  We also each have a couple decorative pillows.

Kitchen - five dish cloths, three dish towels (one is brand new with the tags on it and has never been used), two decorative hanging dish towels, one set of potholders, two dozen cloth napkins.

Other - a fleece throw across the back of the couch, a small assortment of rags and two throw rugs.

That's it.  Hard to believe that is all we have but it is also all we need.  Since I do a load of laundry nearly every day we don't run out of anything and while one set of sheet dries on the line we have a spare to put on the beds in the meantime.


Do I miss having a closet full of linens to choose from?  Nope.  Not one bit.
Posted by Thrifty Mom In Boise at 5:01 AM