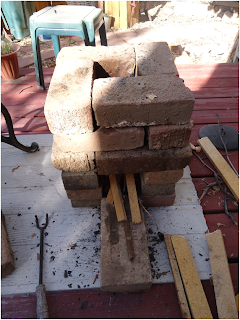 Not the most beautiful thing, but very functional.


On Sunday afternoon we built a rocket stove.  A what, you might ask.


A rocket stove is a simple design for an outdoor stove you can cook on. It is extremely efficient in that it produces a high heat output with a minimum of fuel, namely sticks and twigs.


After some online research I decided I needed to build one of these in our backyard.  I quickly discovered you can build them as elaborately or simply as you please.  They can be as expensive or as cheap too.  Ours cost us a whopping zero dollars and zero cents.


By using reclaimed fireplace bricks I already had on hand we constructed ours on our deck right next to our fire pot.  By arranging the bricks in a certain way, this one fashioned after watching a video on YouTube (Build a Rocket Stove With 16 Bricks), I was able to get it done in less than 10 minutes.


I used about 24 bricks by the time all was said and done.  I didn’t have a paver available for the base so I made my own base out of four bricks.  Then I got started and when I was done I felt it was a little short so I added one additional course of bricks.  This way one can comfortably sit in a lawn chair and cook.  Much easier on the back!


We got ours started with a few twigs, a couple dried leaves and a crumbled sheet of paper.  We quickly learned that less is more here.  We over filled it the first try and had to clear it out and start over.  The key is the way the stove draws air.


Once your “kindling” begins to burn you just feed sticks into it and the flame shoots up the flue.  I used my footed Dutch oven to test it out with.  If I end up using my cast iron skillet down the road I’ll borrow the grate off our BBQ grill to support the pan and allow for airflow.


To control the intensity of the heat you just control the feeding of the sticks.  Too hot, pull the sticks back a little, too low add another stick.  We were able to boil a pot of water in 20 minutes, heat a can of clam chowder to a light bubble in 10 minutes and make a meal of barbeque beans and smoked sausage from scratch in 25 minutes and that was starting with half frozen beans.  My youngest daughter timed everything, she insisted. 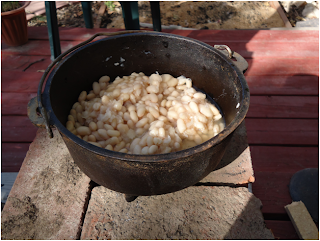 We started with some frozen navy beans from the freezer.
I partially thawed them in the microwave before we started.﻿ 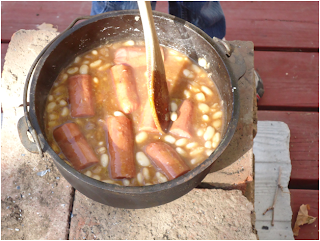 Added the rest of the ingredients.
BBQ sauce and smoked sausage.﻿ 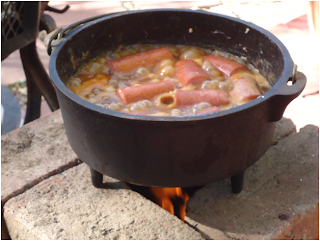 Before we knew it lunch was ready!﻿


As we sat there enjoying our creation I thought a lot of the poor displaced people on the East coast that would probably love to get their hands on one of these right now.  I know it would have come in handy a few weeks ago when our power was out for 4½ hours one evening and again for 4 hours a few days later when the power company replaced the faulty transformer in our neighborhood.


We messed around with it for four hours and I was quite impressed with the fact that I could still touch the outside of the bricks.  So I’d say it is pretty safe to use.  Perfect for camping or up at a cabin.


I watched a video of a guy that built one for canning.  I may just have to give that a try next year when I do a batch of peaches.  That would sure help keep the mess down in the kitchen, not to mention the electricity it would save.  As long as you can keep you canner at a full boil and the jars seal, why wouldn’t it work?  Maybe I’ll start smaller with a batch of jam first.


I’m sure we will use it again and soon.  It was great fun and the girls thought it an incredible feat.  Certainly a fun family project on a warm and sunny fall afternoon.  What do you think?  Would you consider building and using one of these?
Posted by Thrifty Mom In Boise at 7:05 AM

Email ThisBlogThis!Share to TwitterShare to FacebookShare to Pinterest
Labels: Crafts And Projects, In the Kitchen