Anatomy Of A Turkey (Or A Chicken) 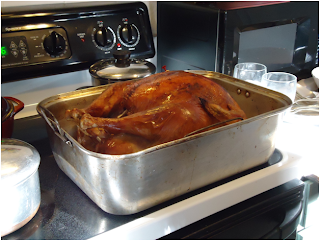 Just like a pot roast I find I can get a lot of mileage out of a roasted turkey, or chicken for that matter.  My daughters asked me why I buy such a big turkey each year and the truth is we will eat off it for a very long time.


After brining and roasting our turkey we enjoyed our Thanksgiving meal with a huge amount of the bird still remaining.  I sliced a bit for sandwiches and leftovers but it scarcely made a dent. 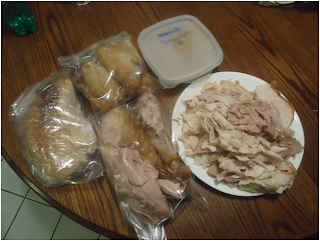 I removed one whole breast and double wrapped it for the freezer for a future Thanksgiving style meal.  I then removed the wings and wrapped them up to freeze so I can make more turkey broth later in the spring or summer when we run out.  Since we are not great lovers of dark meat I remove some of the meat from the legs and then wrap them up to freeze for making broth as well.


Once I have removed all the breast meat, both wings and both legs I get busy and remove the remaining meat from the carcass and placing it into a bowl.  This meat is a combination of dark and white and I like to chop it up and freeze in smaller packages to use in soups and casseroles later down the road. 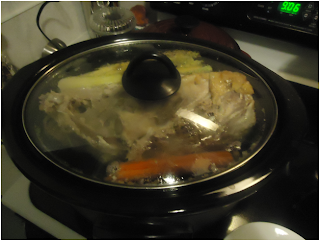 The carcass is then placed in my slow cooker.  I like to leave a bit of meat on it so I have a very flavorful broth.  I add a small onion, a couple carrots and a few stalks of celery.  Cover with water and place on low for about 8 hours.  This year I put mine on overnight so it was ready in the morning. 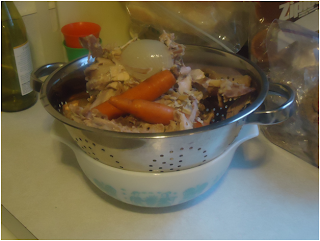 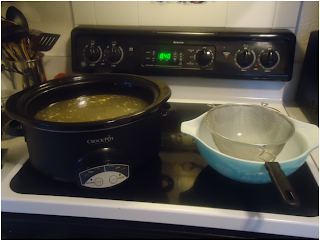 Once it has cooled a bit I remove the big pieces with a slotted spoon to a colander I have set up on a medium sized mixing bowl.  I strain the broth in a larger mixing bowl, add what has dripped out of the colander, and set it in the refrigerator to chill.  Once it is chilled I skim the fat off the top and divide it into one and two cup freezer containers.  Once labeled the containers are placed in the freezer.  I use this broth for soups and in recipes that call for chicken broth as one of the ingredients.


Sometime in the late spring or early summer I will repeat this process with the wings and later with the legs to replenish my supply.  I try to make sure that nothing goes to waste when it comes to our Thanksgiving turkey.

You may also enjoy revisiting Anatomy Of A Pot Roast.
Posted by Thrifty Mom In Boise at 6:35 AM

Email ThisBlogThis!Share to TwitterShare to FacebookShare to Pinterest
Labels: In the Kitchen